An oscilloscope is an electronic device that automatically uses the signals which are fed into it with the help of probes which are hooked up to an electric circuit. It is a scientific instrument or a piece of medical monitoring equipment.

The Oscilloscopes can be used for looking at any and all kinds of signals that change in circuits over time. It can also be used to locate faults in broken televisions, radios, and all kinds of similar equipment. The probes of typical oscilloscope let you feed in the electric currents via coaxial cables. 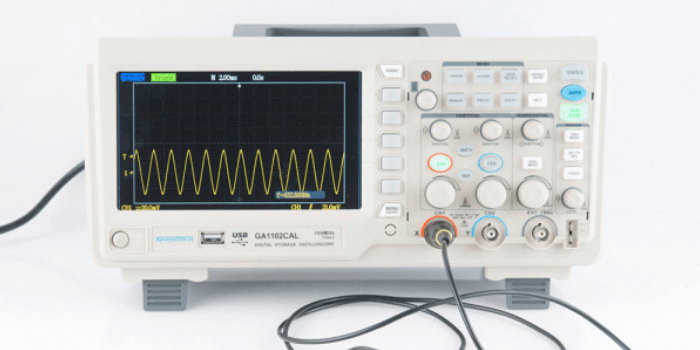 Plug in the transducer that converts one kind of energy to another. For example, a microphone can be used to study the sound signals with the help of best digital oscilloscope; you can use a thermocouple to study the changes in the temperature or a piezoelectric transducer in order to study the vibrations such as heartbeats.

How an oscilloscope works

The electrical signals which are fed into the x and y connections effectively become the x and y values on your on-screen chart. As there is a one-to-one correspondence between the two values or points, a traditional oscilloscope is known as an analog device.

Check out our TOP 5 Oscilloscopes on sale today!

The vertical system is the first entry point for the signals coming directly from the probe. The amplitude of the incoming signal to the voltage range of the subsequent circuits is optimized. There are usually two knobs or controls in this section which help to control the vertical position and volts/division. The volts/division knob will allow you to set the vertical scale on the oscilloscope screen.

The acquisition system encompasses the time-base (or horizontal) elements plus the actual digitizing and storage elements. It samples the signal voltage, acquiring the numerous data points to display on the screen. In a best digital oscilloscope, the horizontal system contains the sample clock, which gives each voltage sample a precise time (horizontal) coordinate.

The trigger system detects a user-specified condition in the form of an incoming signal stream and applies it as a time reference in the waveform record. The event that meets all the trigger criteria is displayed on the screen similar to the waveform data preceding or following the event. The trigger system ensures that a stable and consistent waveform will be displayed on the screen. The trigger system looks for the voltage thresholds, pulse widths, logic combinations (on multiple inputs), and many other conditions to qualify an acquisition. The trigger section is entirely devoted to stabilizing and focusing the oscilloscope. The trigger tells and signals the scope what parts of the signal to trigger on and start measuring. A poorly triggered waveform will produce seizure inducing sweeping waves.

There are a series of buttons and screen menus that make up the entire trigger system. The main purpose of the system is to trigger the source and mode.

Here is the review that the team of this website did about the Best Oscilloscope for Audio.